Landfill Harmonic is a documentary in the works about an orchestra in a Paraguayan slum whose instruments are made entirely of garbage. I was so inspired after watching the short trailer (below). These people’s ingenuity and vision is astounding. So often I throw things out simply because I don’t know what to do with it or where to put it. I don’t really think about giving it a second life. We live a life of excess where ingenuity takes a back seat to the ease of consumption.

This story got me thinking about letting creativity extend beyond school and Photoshop, but rather making it a part of everyday life: what we choose to do with what we have or how to do without what we don’t. That’s the basis of creativity. We often think of a creative person as someone who knows how to draw or paint or compose a piece of music, but creativity is much more than that. It’s about finding a new way of doing things. It’s about finding a way to transcend your environment and circumstances and make due with what you’ve been given and making something beautiful.  I love the opening quote:

“The world sends us garbage. We send back music.” 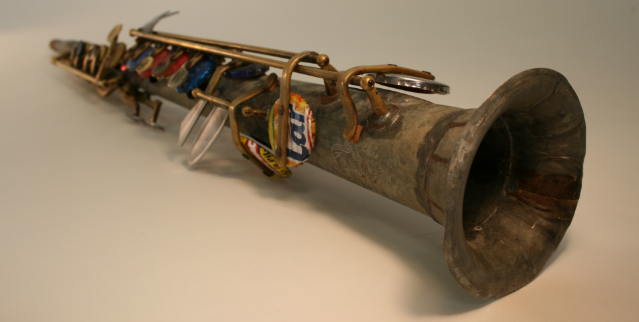 Landfill Harmonic is a Kickstarter project and they’re still trying to reach their goal. If you find yourself as inspired by this story as I was, definitely give them your support.

The last video I’d like to share in this series is a talk by Janet Echelman. What I love most about this talk is Echelman’s resilience and spirit. After her paintings were lost before an exhibition, she found a way to create something extraordinary, rather than wallow in self-pity. She took an unfortunate situation and a humble material and transformed it into something beautiful.

I hope you’ve enjoyed the posts as much as I’ve enjoyed putting them together.

For more Ted and Art click here, here, and here 🙂

Oops! I’m sorry I’ve been MIA for a while, but the week after spring break is always the hardest to get back in the groove, don’t you think? To make up for it I’ll be posting two Ted and Art posts today.

First up, is designer Andrew Byron. I must admit I didn’t pay much attention to type at first, but since I started taking design classes I’ve developed a huge appreciation for it. I love the way Byron sees the world in type. He is forever engulfed in creation which I both admire and desire. Enjoy!

The second video I want to share today is not directly related to art or design, but many of his points speak to the importance of design as a tool to help shape a path for action or inaction. I found his comparison of government ads vs commercial ads and his study of magazine layouts extremely interesting.

For more Ted and Art click here and here.

Look carefully. Liza Lou‘s life-sized replicas are made using tiny beads and strings of cotton. It is awe-inspiring to imagine the labor that goes into every one of her works. That’s dedication. That’s love. The kitchen, one of her earlier works, was made entirely by her own two hands. She now works with artisans in South Africa. The process of working in unison with the women in South Africa inspired the “rope” which is meant to signify unity. I find her work to be not only stunning, but truly moving. I imagine the time and dedication that goes into every piece and I want that for my own work. Her love for the craft–for creating–is contagious.

It’s officially spring break for me! I don’t even mind still having to go to work full-time and allergy season kicking in because not having a load of projects due the next week meant  I got to ride my bike, drink a cold beer, and visit some new food trucks this past weekend. I didn’t even cook  on Sunday! Now that it’s Monday and I’m back at work, I think it’s time to devout the rest of my so-called spring break to develop a strategy. The first half of my first semester back in school was pretty chaotic with a ton of up-all-nighters and way too many mood swings. All the anxiety and last-minute work has been showing not only in my finished projects but in the way I carry myself as well. I need a new plan and a new schedule. I want to have time to do all the work that needs to get done, side projects (drawing lessons please), plus some down time. Besides all that, I am “training” for a 5k coming up soon and falling in love with Tina Fey.

How is life on your end?

The second video for the Art and Ted series is by photographer, Miru Kim. Her work is very different from Aparna Rao’s playful approach last week, but I am equally in love with it. What draws me to Kim’s photographs and her talk is her fearlessness and obvious passion for her subject, which is truly unique and intriguing . Seeing her talk she looks very shy and reserved, but she comes alive in her photographs. In the same way, her choice of location for her photographs (old, abandoned sites) may appear worn down at first glance, but her images revive them. Her work inspires me to put myself out there and explore. Let me know what you think of the talk.

Ana Zhuravleva’s photographs have me smitten. It’s not just the composition and the colors, but the imagination. My mind can’t help but wonder/wander off and dream. I want to live in the world of these photographs. Don’t you? Most of her photographs seem to belong to some wonderful children’s story book. But besides being light and fantastic, there is also a heavy drama that seems to coexist in the pictures which really intrigues me and makes me revisit the photographs over and over again. What do you think?

All photographs belong to Anka Zhuravleva for more visit her website.